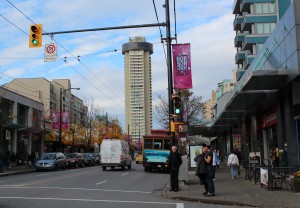 This city tour is an ideal Vancouver introduction whether you’re in town for a few hours or a lifetime. Fully narrated by entertaining, knowledgeable local guides, this tour includes all of Vancouver’s famous landmarks. Tour includes pick up and drop off at all Vancouver and Richmond (airport) hotels.

Our precruise Vancouver City Tour picks you up at 10:00 AM from your hotel; allowing plenty of time to get on board your ship.

Our post cruise Vancouver City Tour picks you up at 10:00 AM from the cruise ship terminal with your luggage and at the end of the tour drops you off at your hotel, the airport or the train station.

The 4 hour city tour stops and lets passengers off twice in Stanley Park for 15-20 minutes each, once at Granville Island for 45+ minutes and once at the Lookout observation tower for 20-30 minutes. Granville Island is where you can get lunch and explore artisan shops and a public market.

Prices (including tax) – In Canadian Dollars

Stanley Park: One of the largest urban parks in North America, Stanley Park is 1000 acres of rain forest, beaches, gardens and fun. The bus stops at Totem Park where you can wander among totem poles and, at Prospect Point, you’ll have a great view of Lions Gate Bridge, the Burrard Inlet and the North Shore Mountains. Your tour parallels the Stanley Park seawall, one of the most popular places in Vancouver to walk, ride a bike or rollerblade. Two stops in Stanley Park

As you drive through Chinatown, you’ll get a glimpse of Dr Sun Yat Sen Garden. This full-sized classical Chinese garden is the only one of its kind outside China. Though the garden is small compared to some of Vancouver’s other gardens, it provides a sense of serenity, balance and order found in no other Vancouver garden.

Drive along the beach at English Bay, located in the trendy West End. English Bay is an ideal place to swim (in summer), stroll or watch the boats, ships and the world go by. Famous with locals for its sunsets and for its annual Fireworks competition held at the end of July and the beginning of August.

Granville Island: Once an industrial area, Granville Island was redeveloped in the 1970s and the result is a mecca for tourists and locals alike. Browse through the public market, kids market, marina, art studios and galleries, Emily Carr University of Art and Design and many specialty shops. You’ll have time for a meal or snack at the international food court. You’ll stop for lunch at Granville Island.