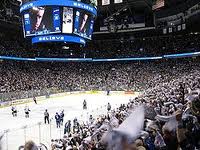 When they aren’t participating in sports, Vancouverites like to watch them, and they have a number of teams to watch.

Vancouver wouldn’t be a genuine Canadian city without its own hockey team since Canadians are fairly fanatical about the sport. For outsiders, hockey looks more or less like random events on an ice rink, but for those with a trained eye, it is a perfectly choreographed, if violent, event.

Word has it that hockey players are the best conditioned of all professional athletes, and, perhaps the toughest. If you aren’t sure about that, take a look at the face of any hockey player who gets an interview. He looks like he came straight from the battlefield.

Hockey season runs from the middle of September to the middle of April, so if you’re going to be in town during that time, chances are you can catch a game at Rogers Arena. Games start at 7:00pm. To find out everything you want to know about the Canucks and order tickets, go to the official Canucks Website.

Vancouver’s CFL (Canadian Football League) team began in 1941 as the Vancouver Grizzlies in the Western Inter-provincial Football Union. The name was changed to the BC Lions in 1954. The team plays at BC Place and the season lasts from June to October, longer if the team makes it into the playoffs.
Differences between Canadian and American Football

Although many people associate football with the US, football has as long a history in Canada as it has in the United States. The first football match, under Harvard rules, was played between Harvard University and McGill University at Cambridge, Mass, in May 1874.

What differentiated this football from other early games called football is that it was patterned more after rugby than soccer.

There are a number of other differences between the two games that you’ll notice if you are familiar with American football and attend a Canadian football game.

The Vancouver Canadians are part of the Oakland A’s farm system. This Pacific Coast League baseball team plays at beautiful Nat Bailey stadium from their first home game in June until their last home game in September.

The Canadians play both afternoon home games and evening home games. You can find the schedule on the Canadians’ website.

Nat Bailey Stadium is worth a visit in its own right. Built in 1951, it is one of the oldest minor league stadiums still in use. It was named after the first owner of the White Spot hamburger chain who was also a longtime supporter of Vancouver baseball. Nat Bailey Stadium is located near Queen Elizabeth Park.

The best way to get there from downtown is to go south on Cambie Street, across the Cambie Street Bridge and turn east, left, at 29th Avenue.

Vancouver does not have a professional rugby team but it has a strong amateur program. There are four men’s leagues, a women’s league, and a junior league.

For people who think football players and hockey players are tough, watching rugby is an eye opening experience. Rugby players play a total contact sport in shorts, without pads, outdoors in the winter. Ears have been known to disappear in the heat of battle.

The rugby season runs from the middle of September to the middle of April. If you like watching serious contact sports, don’t miss a rugby game when you’re in town.

Vancouver rugby fields are located at:

The BC Rugby Union’s premier team, the Vancouver Caps’, schedule is available at the Union website.

BC Sports Hall of Fame 777 Pacific Boulevard
The BC Sports Hall of Fame and Museum (BCSHFM) preserves and honours BC’s sport heritage by recognizing extraordinary achievements in sport. It has a 20,000 square foot space comprised of exhibits, galleries, interactive displays and special event space. The stories of sport in BC are told from the early 1800s to the current day.