Flat Hikes in Vancouver and the North Shore

Vancouver is paradise if you want to be in the city but have nearly instant access to nature. You’re never far from a hike in a Vancouver park, the seashore or the mountains. However, it is not always easy to find a hike that is long enough and also flat enough.

Many satisfying hikes require some uphill and downhill work. If you’re looking for excellent, flat walks or hikes, try some of these.

The 10k Stanley Park Seawall is a perfect hike, breath-takingly beautiful, and a great orientation to Stanley Park, the Lions Gate Bridge. Across the inlet, you can see the North Shore with its splendid mountains and its dockside mounds of yellow sulphur.

Stanley Park also has an excellent network of trails that provide peace and tranquility in the middle of the city. Get a Stanley Park Map and Guide for the location of the trails.

Of course walking in neighbourhoods is always fun if you like house browsing. A meander through Shaughnessy, Point Grey or Kitsilano will give you a feel for three of Vancouver’s best neighbourhoods.

You can also do part or all of the Trans Canada Trail that goes through Vancouver. It starts at the SeaBus terminal and goes west to Stanley Park. From there it goes around Stanley Park, past English Bay and across the Burrard Street Bridge.

Once across the bridge, walk through Vanier Park, past the Maritime Museum, then along Kitsilano Beach, through Point Grey, Jericho Beach and Park, Locarno Beach all the way to Spanish Banks.

Once you’re at the western tip of the city, you might want to visit University of British Columbia campus or Pacific Spirit Park which has 35 kilometres of trails of its own and is nearly twice the size of Stanley Park.
To get to Pacific Spirit Park, cross the Burrard Street Bridge. Stay on Burrard to 4th Avenue. At 4th Avenue, go west (right) and stay on 4th all the way to Blanca where you’ll turn left. When you reach 16th Avenue, turn right. 16th Avenue will take you into Pacific Spirit Regional Park where you’ll find enough flat trails to keep you busy all day.

While you’re out here at the far west reaches of Vancouver, you may want to stroll around the University of British Columbia or go for a walk on one of the nearby beaches.

If after exhausting these resources, you haven’t yet exhausted yourself, then cross the Lions Gate Bridge to the North Shore where you’ll find the following excellent, flat trails, some of them in the woods. 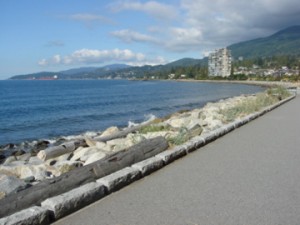 The West Vancouver Sea Wall is the North Shore’s equivalent to the Stanley Park Seawall. Start your walk at the south end of 15th Street in West Vancouver, just next to the millennium clock. Walk west along the road past John Lawson Park and continue for another half block until you come to a path that leads left to the beginning of the Seawall. This is a popular walk all year around, rain or shine. For many locals, it’s part of the daily routine.

Dogs aren’t allowed on the West Vancouver Sea Wall; however, they are allowed behind the fence that borders the north side of the wall, so many dogs accompany their human companions on a parallel but separate walk just on the other side of the fence.

Instead, go up 25th to Marine Drive where, on the southeast corner, you’ll find Caper’s, an upscale, health conscious market and café. You can eat in the café where the food’s quite good or buy picnic supplies, carry them back to the beach, and have a picnic.

Sea View Trail
Another great flat walk, perfect for dogs and children, on the North Shore, the Sea View Trail, starts in a neighbourhood. To reach the trail from Vancouver, cross the Lions Gate Bridge and take the Upper Levels Highway toward Horseshoe Bay.

At 21st Street, exit the highway and drive down 21st to Marine Drive. Turn west (right) on Marine Drive and follow it as it wends its way for several kilometres out to Fisherman’s Cove and the West Vancouver Yacht Club.

Turn right on Primrose and follow it up and to the right. Park at the wide spot on the right hand side of the street just before the little bridge that crosses the creek. Just beyond the creek is the entrance to the Sea View Trail. The trail has a short, steep beginning but almost immediately levels off and is flat for the duration of the 3 kilometre trail. This trail doesn’t form a loop so you’ll return the way you came.

Once back to your car, retrace your steps back to Marine Drive. On the corner of Primrose and Marine Drive is a great café and Deli. You can eat in the café or eat outside or pick up some food at the deli and have a picnic at Lighthouse Park, which you passed on your way to Fisherman’s Cove.

Millstream Trail
This great, flat hike, perfect for dogs, begins in the British Properties, one of West Vancouver’s most elegant neighbourhoods. To get there, cross the Lions Gate Bridge and go straight at the end of the bridge then around to the right and onto Marine Drive in West Vancouver.

Stay on Eyremount until you come to Millstream, which goes off to the right. Turn right on Millstream. Just past the house on the corner, there’s the Millstream trailhead on the left side of the road. Park your car near the trailhead and proceed from there.
The Millstream Trail goes west for about three kilometres and comes out on the Cypress Road just across from the High View Lookout. If you walk the whole trail, you’ll be rewarded by fantastic views of Vancouver, Vancouver Island and much of the Lower Mainland. About three quarters of the trail is flat. The last part is narrower and more undulating.

For more hiking suggestions, check out our Hiking Page