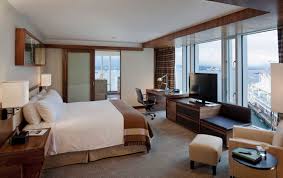 Vancouver boasts four Fairmont Hotels. The newest addition, opened in January 2010, just in time for the Winter Olympics, is the Fairmont Pacific Rim. Located just across the street from the new Vancouver Convention Centre, the Pacific Rim is the most elegant of the Vancouver Fairmonts, with 400 rooms, 175 residences and five star amenities including the Willow Stream Spa, a 4,000 sq ft fitness centre, three restaurants, a roof top pool, state of the art technology

Because the hotel caters as much to business travelers as tourists, it has an unusually well equipped business centre, a health club and spa.
There is also a flower and herb garden on the third floor, like a secret garden in the middle of the hustle and bustle of downtown, and a rooftop deck and swimming pool, again with panoramic views of Vancouver and the surrounding mountains.

The Fairmont Hotel Vancouver at 900 West Georgia on the corner of Burrard and Georgia Streets is right at the center of the downtown core.

The downtown Fairmont Hotel Vancouver, one of Canada’s famed “railroad hotels”, is the hotel of choice for Queen Elizabeth which you won’t find surprising when you come to stay.

The hotel was completed in 1939 in time for the visit of King George VI and Queen Elizabeth. The hotel cost 12 million to build and took 11 years, including a 5 year hiatus during the great depression. The hotel was restored to its original splendor in the mid 1990s at a cost of $70 million.

The Fairmont Vancouver Airport hotel is not located near the airport; it is located IN the airport. You walk out of the lobby, down the stairs or hop on the elevator and you are at the departure counters. It’s the ultimate luxury if you have to fly into or out of the Vancouver International Airport, especially late at night or early in the morning.
The hotel has a fitness centre, swimming pool, restaurant and lounge. It also has meeting facilities. You can work out at the fitness centre and watch people checking in for their flights just below.

The hotel is a favourite with local travelers who treat themselves to a night at the Fairmont Waterfront the night before or after they travel, especially in winter. That way they don’t have to worry about getting to or from the airport on wet or icy roads early in the morning or late at night.