There are eight hotels in North Vancouver. Five of them are located within a block of each other near the corner of Marine Drive and Capilano Road. 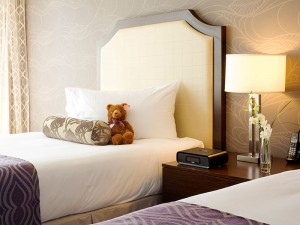 The sixth hotel, the Pinnacle Hotel At The Pier, is a new boutique hotel located in the lower Lonsdale area. It is close to the Seabus, a passenger ferry which travels across the inlet to downtown Vancouver, and it has wonderful mountain and ocean views.

These five hotels are one block from the north end of the Lions Gate Bridge, one of two bridges that connects North Vancouver with downtown Vancouver and Stanley Park.

There are a number of advantages to staying in North Vancouver. First of all, North Vancouver hotels tend to be less expensive than comparable downtown Vancouver hotels, parking is free and if you prefer a suburban to an urban environment, North Vancouver is not only away from the downtown hustle and bustle, but it is also close to North Shore attractions: Capilano Suspension Bridge and Park, Capilano Fish Hatchery, Grouse Mountain Skyride, Grouse Mountain and hundreds of miles of hiking and mountain biking trails including the Grouse Grind.

And North Vancouver hotels are close to great shopping. Park Royal Mall, Canada’s oldest mall and still one of its best, is less than a mile from Capilano Road and Marine Drive.

Park Royal is located at the corner of Marine Drive and Taylor Way in West Vancouver. It’s large and diverse and the shopping opportunities are as good as what you’ll find in downtown Vancouver malls.

At the same time, if you have a car, you are less than ten minutes from the heart of downtown Vancouver and Stanley Park. Just cross the Lions Gate Bridge and you are in Stanley Park and 5 minutes from downtown.

If you don’t have a car, don’t worry; there’s a major bus stop at the corner of Marine Drive and Capilano Road so you are just a short bus ride from Stanley Park and downtown Vancouver. The Lonsdale Quay Hotel is just as convenient since it is a three minute walk from the Sea Bus, the ferry that travels back and forth between downtown Vancouver and North Vancouver all day and late into the evening. You can get a Sea Bus schedule or a regular bus schedule from www.translink.bc.ca. The Pinnacle At The Pier is also very close to the Seabus.

The North Vancouver Holiday Inn, located at the north end of the Second Narrows Bridge, was built about 7 years ago. The hotel is fairly self-contained with a microwave oven and mini fridge in each room and kitchenettes in larger rooms and suites.

The Holiday Inn North Vancouver also has an indoor pool, spa fitness center and spa, a restaurant, lounge and pub and meeting rooms. It is also only a couple of blocks from Lynn Creek and a trail that goes to Lynn Creek and Lynn Canyon Suspension Bridge.